Yamato is the Supreme Flagship of the "Fleet of Fog", and one of the two Super Battleships of the Fog. In the anime, she met a human, Shouzou Chihaya, who wanted the Humans and the Fog to live in peace which each other. Like her sister, Yamato also refers to Shouzou as Father.

Yamato has white and blue color scheme with gold cannons in anime.

As a Super Battleship, Yamato is in possession of the most powerful weaponry available to the "Fleet of Fog". These include over two hundred Photon cannons, multiple missile launchers, high-angle lasers, 32 Super-Graviton Cannons and 24 Torpedo tubes (12 in the bow and 10 in the stern) Regardless of that fact, Yamato is armed with enough weapons to wipe the islands of Japan from the map entirely. It is also assumed that she has unprecedented processing power as it only consumed 2% of her processing power to create a Mental Model for Yukikaze, while Repulse had used close to a quarter of hers to do the same for Vampire, which noticeably worse results.

Yamato is also supposed to have one of the most powerful Wave-Force armors within the "Fleet of Fog", but since she is yet to actively participate in any battles (only the end result of her clash with Musashi had been shown), it is impossible to verify this. Yamato also possesses a Mirror-Ring system, which is capable of catching and redirecting away a single attack of practically any power level.

According to Hyuuga, Yamato was the first "Fleet of Fog" vessel to gain a Mental Model - this should have happened sometime around 2045, at least nine years earlier than any other vessel; it appears that at that time she had only one Mental Model - and it was on her orders that all other vessels with powerful enough Union cores gained access to this technology. It is currently unknown where and exactly how Yamato managed to obtain her Mental Models.

This Mental Model is Yamato's known to her subordinates and has the name matching the name of the vessel. She appears as a girl in her late teens with long brown hair and deep brown eyes. She's always seen in some sort of a dress or a dressing gown, most often pink in color. She also has a matching pink bow in her hair.

Yamato is regal, calm, soft-spoken and is indeed acting in the ways befitting the leader of the "Fleet of Fog". She is rather laid-back and kind to her subordinates. Also, she appears to never seek confrontation; however, that doesn't mean she cannot or will not fight back. Yamato is powerful, even as a Mental Model, capable of taking on Takao's Mental Model without even exerting herself. In the anime, Yamato wears a white dress, white long gloves, and a white bow in her hair. Her eyes are deep blue and her hair is black.

Yamato's hobbies are unknown but she comments that she likes meditating underwater in the tranquility of the sea.

This is the second Mental Model of the Super Battleship Yamato and the one that rarely appears in public. Battleship Hyuuga, despite being a fleet flagship at one point, never saw her (or at least she never revealed she did). Only I-400, I-402, and much later, Takao, are confirmed to have good knowledge about her. Kongou and Nagato only know her as the other Yamato.

Kotono is identical to Yamato in her appearance, but their clothes differ. Kotono is seen in a variety of attires ranging from gardener's clothes to a copy of the Japanese Maritime Institute of Technology's uniform.

Unlike Yamato, Konoto is cheerful, bubbly, and likes to chat. She also has a wicked mind and a sharp tongue to match it. From the looks of it, this Mental Model is the mastermind behind all of Yamato's schemes.

Kotono appears to like gardening and has a small garden, which gives some fruits, on the ship's deck. She also likes fashion with I-400 and I-402 often falling prey to her bouts of designing clothes. The same fate befell Takao too when the tsundere heavy cruiser was on board the Super Battleship.

This Kotono Amaha was also the girl that was Gunzou's classmate and crush in the Japanese Maritime Institute of Technology. In Manga Chapter 54.5 it is shown that during her presence there she for some reason she could not recall her memories as the ship of the "Fleet of Fog" and was visited by the Admiralty Code. Whenever she fell asleep she woke up on her ship-body inside her other Mental Model either suppressing the original personality or being allowed to do so. She also lacked the intuitive control of her ship-body and which resulted in the accidental shot from her Photon Cannons.

Manga Chapter 116 reveals that Kotono Amaha was retrieved by Yamato in 2054 to serve as the Fog's superordinate program in the event of the Admiralty Code's disappearance. Why she was chosen and whether or not she is still human remains a mystery.

In 2039, Yamato vanished during the Great Naval Battle for reasons unknown. Her first known reappearance was on May 1st, 2054 at Facility No. 4 where she accidentally started the fire that claimed half the students who were there. The purpose she was there was to retrieve a girl named Kotono Amaha to use her as the Fog's new superordinate program in the event that the Admiralty Code has vanished for 100 years. Kotono went along willingly and Yamato made her first Mental Model by copying Kotono's physical appearance. Both would leave the facility but not before covering the casualties with nanomaterial to revive them at a later date. Yamato reappears to the Fleet of Fog with a Mental Model and disseminates the program to the rest of the Fleet of Fog, allowing them to form their own Mental Models.

For a long time, Yamato is a passive player. She does some scheming, a lot of which is centered around I-401 and Gunzou Chihaya, which makes her less trustworthy by the other Fleet of Fog ships but all of her plans are being brought to reality through her subordinates. Yamato doesn't appear to hate humans and is even assisting Gunzou from behind the scenes.

Like many other vessels within the "Fleet of Fog", Yamato is looking for the Admiralty Code.

In Manga Chapter 48, Yamato is seen authorizing and creating a Mental Model for one of the destroyers that accompany her: Yukikaze. This was done because she needed something done and I-400 and I-402 were away on their missions, which couldn't be intermittent. In order for Yukikaze, a destroyer, to have a Mental Model, Yamato had to share 2% of her own computational power with her.

During Kongou's fleet's battle against I-401, after Hyuuga's attack on Hiei, Yamato ordered Yukikaze to collect Union cores of both battleships.

Around the time I-401 is fighting against Kongou's fleet, Yamato infiltrates Yokosuka city, probably to be closer to the events that are going to take place there.

In Manga Chapter 100, Yamato is shown to be in the ruins of Facility No. 4 in front of a nanomaterial tree, preparing what she calls 'fruits' that collect information from the preserved bodies of the Facility No. 4 Fire casualties. In Chapter 115, she invites Japan's three Prime Ministers to the Facility and explains the Fire's origins to them in Chapter 116.

In the movie Cadenza, at the beginning of the movie, Yamato is seen fighting Musashi and a horde of Nagara-class cruisers. She appears to have "turned off" all the Nagara light cruisers. Musashi then confronted Yamato, dubbing the latter disobedient towards Admiralty Code, in which she cries over. Musashi opened her Super Gravity Cannon and aimed it at Yamato, implying she will sink her.

Yamato activates her Mirror-Ring to avoid the impact. As the Cannon is sucked in the Mirror-Ring, the clouds splits. Musashi propels herself to Yamato, causing a contact impact. Musashi destroys Yamato's Klein Field with a laser beam hidden underneath the tip of her vessel. She then relentlessly attacks Yamato in close range combat.

Yamato's vessel is destroyed by the seconds as Musashi continuously attacks. The Mirror-Ring is disabled, and Musashi fired her Super Gravity Cannon to Yamato. An utter defeat to the Flagship Yamato, following a huge explosion from Yamato's destroyed vessel. At the last minutes as her mental model is drowned, she somewhat transfers her core to an unknown fog submarine, which could probably be I-401. In the final battle of Cadenza, Iona decides to become one with Yamato, the submarine I-401 merges with the wreckage of the Super Battleship, Iona emerges from the ocean, she uses the Mirror-Ring System to redirect Musashi's Super-Graviton cannons back to her. The two battleships engage in a Photon Cannon duel side by side. Later, Yamato decides to forgive Musashi and she will accept her in her heart. An enraged Musashi activates her Mirror-Ring System and SGC against Yamato, the latter is swallowed by Musashi's Mirror-Rings. Yamato activates her Mirror-Ring System once again and reappears above Musashi, she concentrates her 32 SGCs in one Single Shot that deactivates Musashi's Klein Field, this results in both Yamato/Iona and Musashi sinking.

Supreme Flagship of the Fleet of Fog 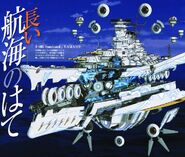 Add a photo to this gallery
Retrieved from "https://aokihagane.fandom.com/wiki/Yamato?oldid=8492"
Community content is available under CC-BY-SA unless otherwise noted.