Iori Watanuki is the member of the I-401's crew; she is in charge of the submarine's engine and energy systems. She also does repair the I-401's engine when it is something that can be done by a human.

Iori has midback-long hair rather unruly (blonde in manga, but orange in anime) made into two pigtail on the sides of her head. She has brown eyes. Normally her clothes consist of some singlet, cargo pants and heavy gloves. She is often seen wearing protective goggles over her eyes.

Iori is a rather cheerful girl and she is often seen teasing others - most often, Shizuka. After the battle with battleships Haruna and Kirishima Iori is seen lamenting about Gunzou not seeing her as a woman. However, it doesn't really look like she has a strong crush on him, if she has it at all.

Iori is a very intelligent girl, having scored fifth in her year during the last annual test she took while still attending the Japanese National Maritime Institute of Technology. Because she is in charge of I-401's engine and energy systems - which she repairs to the best of her abilities - Iori is one of the humans that are most knowledgeable about the "Fleet of Fog" technology. Quite possibly, she is even the most knowledgeable one.

We are first introduced to Iori when she is already the member of the I-401's crew for a long time. From her dialogs with Gunzou it is revealed that she, along with Sou Oribe and Kyouhei Kashihara, had joined the crew a couple of month before the battle with battleship Hyuuga. Ever since then, Iori was in charge of I-401's engine.

Iori doesn't have her personal mini-arc, so for the most part she is a background character. 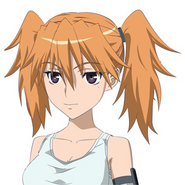 Iori Watanuki anime renders
Add a photo to this gallery
Retrieved from "https://aokihagane.fandom.com/wiki/Watanuki_Iori?oldid=8034"
Community content is available under CC-BY-SA unless otherwise noted.