Makie Osakabe is one of the more prominent secondary characters within the series. She is a Design Child created to develop a working weapon that could harm "Fleet of Fog" vessels (Vibration Warhead Torpedo). She has successfully completed her mission prior the start of the series.

Makie is a small ten year old girl with brown eyes and light-brown hair. Her clothes vary from time to time, but most often she wears something bright. Additionally, almost at any given time there is some plush toy near her (following the attack on the Osakabe mansion in Yokosuka, Kirishima is playing the role of that toy).

Since she led a mostly lonely life, Makie is someone who easily attaches herself to those that are nice to her, and is willing to see beyond some 'trivial' things like Haruna, Kirishima and Maya being from the "Fleet of Fog". But just as she can form powerful bonds of friendship, Makie can also hold a grudge. In manga she hated Gunzou for years because she had been told that her (not real) grandfather had sailed away on-board of I-401. Makie is also a very bright child - partially because she had been given increased cognitive capabilities as the means for her to accomplish her mission - but is still very naive.

Despite being a child, and one created with mind stronger than body, Makie is still quite strong. She can easily escape the robotic maids of the Osakabe mansion should she wish to. She was also seen to be able to take out her butler (and creator) Lawrence / Toujirou Osakabe, though she had to resort to using drugs in order to accomplish that.

Makie is a Design Child created in order to develop a weapon that would allow humanity to fight back against the "Fleet of Fog". She had successfully completed her mission and developed the Vibration Warhead Torpedo. However, after she had done that, the government saw no further use in her and wanted to get rid of her. Professor Osakabe managed to change their minds and Makie was allowed to live - secluded in a mansion in Yokosuka.

Professor Osakabe, mostly out of selfish desires, gave Makie fake memories of her loving grandfather. In the end, seeing that he couldn't keep this lie forever, he used the visit of I-401 in order to have Makie's "grandfather" disappear. This led to Makie developing a hate towards I-401's captain Chihaya Gunzou. And when I-401 returned to Yokosuka port in order to collect the last prototype of the Vibration Warhead Torpedo, Makie went to the dry docks in order to demand her grandfather back from Gunzou. However he had already left by then and she was left with nothing.

Following the battle between I-401 against battleships Haruna and Kirishima, Makie went to the port in hopes to see her grandfather. He of course, wasn't there; instead Makie saw the area covered in silver sand that she instantly recognized as nanomaterials used by the "Fleet of Fog". She also found Haruna's coat and later found Haruna herself, along with Kirishima's core.

Not expecting Haruna to be a Mental Model, Makie invited her to her house as her friend. However, the photos made during the battle allowed the Military command of Japan to find what exactly Haruna was. Professor Osakabe also got this information due to the leader of the Northern region, Makoto, being another Design Child. Later that night, the JSDF generals, fearing that the "Fleet of Fog" might get the information about the Vibration Warhead Torpedo, ordered an attack on the Osakabe mansion without the permission from Ryoukan Kita. While than man managed to calm the political storm created by this attack, it ultimately led to him retiring from his position of the Army commander.

While Haruna via Kirishima had asked Makie to remain somewhere safe and escape the mansion when she got a chance, Makie still feared for Haruna's safety, which resulted in her crawling onto the battlefield. Even though that was not easy - partially due to the restrictions of the human body - Haruna and Kirishima managed to protect Makie for long enough for the special forces of the Northern region to arrive and push the Army back. Following Professor Osakabe's request, Haruna had Makie taken away to the Northern region, while she and Kirishima secretly followed her there inboard of Maya.

Makie was brought to New Hakodate and placed in care of Chihaya Saori. It is not exactly clear, whether it were Makie's own insecurities and fears or Saori's selfish desire to have a daughter to take care of, but for quite some time Haruna was denied her chance to see Makie. In the end, Haruna had to infiltrate the Chihaya mansion in order to confront Makie.

That confrontation ended in the friendship between Haruna and Makie was complete restored. Seeing that, Saori decided to let Makie go and Makoto had arranged for her to move inboard of Maya. After a lengthy discussion about the plans Haruna and Kirishima had for the nearest future, he had suggested them to return to Yokosuka to investigate the connection between the Facility #4 fire and Chihaya Gunzou - at least in order to keep Maya away from the hunt after I-401 that Kongou had organized. 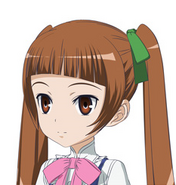 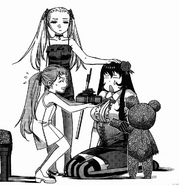 Makie, Haruna and Kirishima inboard of Maya
Add a photo to this gallery
Retrieved from "https://aokihagane.fandom.com/wiki/Osakabe_Makie?oldid=8028"
Community content is available under CC-BY-SA unless otherwise noted.