Nagato is a battleship of the"Fleet of Fog" and the flagship of the Second Oriental Fleet. Together with the First Oriental Fleet flagship Kongou, she is responsible for maintaining the blockade around Japan.

Nagato is the "Fleet of Fog" reincarnation of the WWII Nagato-class battleship Nagato and is the flagship of the Second Oriental Fleet. She has one sister, battleship Mutsu, who is one of her subordinates.

While battleship Nagato is yet to make an appearance in the anime, she had a color page devoted to her in the manga. She has a gray-purplish color scheme with purple markings on her hull

As a battleship, Nagato has powerful weaponry available to her, including multiple Photon cannons, missile launchers, high-angle lasers, 8 torpedo tubes, and undoubtedly, a high-power Super-Graviton Cannon.

Likewise, Nagato, being a battleship of the "Fleet of Fog", has powerful Wave-Force armor, that will protect her from quite a few hits before reaching its saturation. It is not clear whether Nagato is equipped with Mirror-Ring system or not.

Battleship Nagato has two Mental Models. They both appear to be young women of about twenty years old with long black hair and yellowish eyes. Interestingly enough, it also looks like there are always sakura petals in the air around them.

One of the two is dressed like a shrine maiden; her clothes consist of white haori, red and purple haori-himo belt, and a long purple skirt. She also has a red and brown bow in her hair. Her hair is up-swept backwards.

The other Mental Model portrays herself like a geisha. She wears a kimono that is mostly red but gradually changes into purple towards the end of her right sleeve. As is the case with her 'twin', her haori-himo is also purple. She is seen wearing sandals on high platforms.

She is also frequently seen with a long pipe in her hands and the bow in her hair varies from time to time but is always either floral in design or looks like butterfly wings.

Both Nagato's Mental Models are politely distant with others, but at the same time quite intimate with each other. Nagato, while showing no definite love towards humans, isn't as radically against them as is Kongou, and is actually seen wishing Zordan Stark a safe voyage when he departed to hunt Takao down.

Nagato's interests lie within Japanese culture and she entertains herself by trying to act according to the rules of this culture.

Like all flagships of the current time, Nagato is a passive player, who is mostly observing. She, however, acts as a flagship for U-2501 while she is in the Pacific Ocean, hunting down the traitors of the "Fleet of Fog".

In recent Chapters, Blue Steel has decided to target her Fleet to distract it while Hakugei makes its journey across the Pacific to deliver the Vibration Torpedo to America. 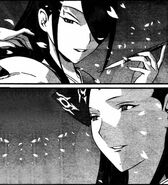 Color Scheme
Add a photo to this gallery
Retrieved from "https://aokihagane.fandom.com/wiki/Nagato?oldid=8489"
Community content is available under CC-BY-SA unless otherwise noted.