Musashi is a superbattleship of the"Fleet of Fog". She's also the flagship of the "Scarlet Fleet" division led by Shouzou Chihaya.

Musashi has blue and orange color scheme in anime.

As a superbattleship, Musashi is in possession of the most powerful weaponry available to the "Fleet of Fog". These include multiple Photon cannons, missile launchers, high-angle lasers and, undoubtedly, a high-power Super-Graviton Cannon. And, unlike normal battleships, Musashi can fire it in several independent shots. It's not clear whether Musashi has torpedo tubes or not, however.

Musashi is also supposed to have one of the most powerful Wave-Force armors within the "Fleet of Fog", but since she is yet to participate in any battles, it's impossible to verify this. Musashi also has a Mirror-Ring system, which is capable of catching and redirecting away a single attack of practically any power level.

As a superbattleship, she possesses powerful computational processing power akin to her sister ship Yamato. But with her human crew controlling around 40% of her equipment, she is able to focus more on other processes, thus improving her overall performance.

Superbattleship Musashi has one Mental Model. She appears as a girl in her early teens with almost white hair. it was revealed in Cadenza that Musashi's eyes are red as she appears to be very prone to open them when she is with Yamato.

In manga she is seen wearing either white fur coat with white fur hat, or a white dress with a bow in her hair. In anime, on the other hand, she is depicted wearing black sleeveless shirt, extremely-short black shorts and black boots with stockings. Either way, a flower of some sort is always present, either attached to her hat, or onto that hair-bow.

Musashi is a bit dreamy and detached from reality, but she seems to have a good understanding of human emotions, even if she doesn't really display them all that much herself - she chastises her captain, Shouzou Chihaya, for his rather underwhelming reaction to the news about his son's supposed death. In the recent chapters it was shown that Musashi is actually helping her crew with day-to-day tasks such as keeping her ship-body clean.

Musashi appears to possibly have an interest in golf. She is seen on her own bridge wearing a polo shirt and a transparent visor (common golfing attire) and carrying a putter.

In Cadenza movie, Musashi was shown to be very shy and, perhaps, somewhat afraid of humans back when Yamato was still around. Following the death of Chihaya Shouzou at the hands of the humans who disagreed with his decision of negotiating peace with the "Fleet of Fog", Musashi abandons that personality in favor of the one we know her with. She nevertheless creates and maintains a nano-material clone of her father to gain strength from.

Apparently a ship of Musashi's power is normally expected to have more than one mental model. Corroborated by the fact that only one mental model has ever been seen, Lexington speculated that Musashi is responsible for operating the U-2501's Mirror-Ring system defense, as the submarine's own Union core could not possibly have provided enough computational power to handle a system intended for a superbattleship.

So far Musashi has been a passive player and has done nothing more that being Shouzou Chihaya's moving base of operations. Despite this, she is still a flagship with at least two major vessels under her command: U-2501 and Milchkuh (sunk) submarines. Capital Ship Bismarck is either allied or a subordinate to Musashi.

In the DC OVA Musashi seems to have slightly different role. She hosted the mental models of the Myokou sisters on her deck during their broadcast on the human's network. She supposedly spoke for Yamato and may be second in command of the entire Fleet of Fog, although she still called Shouzou Chihaya "Father". 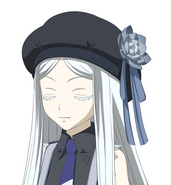 Musashi as she appears in manga

Add a photo to this gallery
Retrieved from "https://aokihagane.fandom.com/wiki/Musashi?oldid=8278"
Community content is available under CC-BY-SA unless otherwise noted.