Kotono Amaha was a childhood friend of Gunzou Chihaya and Sou Oribe; along with them she had enrolled into the Japanese National Maritime Institute of Technology. Officially, she had died during the Facility #4 Fire, but her body had never been found.

Kotono has waist-long brown hair - always with some sort of a bow in it - and brown eyes. In the flashbacks where the true Kotono appears, she is always seen wearing the Japanese National Maritime Institute of Technology uniform, which (for female students) consists of white with blue trims shirt, yellow bow-tie and blue mini-skirt.

"...There was a wall he couldn't get past. She was attractive, energetic and brilliant. If she was a character in a game, you would think she was cheating... She was there." - Kyouhei Kashihara about Kotono. From what little we know about Kotono's time at the Japanese National Maritime Institute of Technology, this description seems to fit her very well.

It is not clear, whether she was aware that Gunzou had fallen for her, but it seems she was unaware of them and she was in love with him without Gunzou knowing about it. From a flashback to a little before the Facility #4 Fire, she was saying that she was looking forward to training with him in a way one could say only to his or her dearest friend. And during the Facility #4 Fire itself, Kotono was still holding onto those feelings until she was buried under the burning rubble.

Kotono herself appears mostly on her ship body with Yamato with the exception of the Manga Chapter 54.5 that was solely dedicated to her. We know that she was a childhood friend of both Gunzou Chihaya and Sou Oribe and that she joined the Japanese National Maritime Institute of Technology along with them.

During her time at the Japanese National Maritime Institute of Technology, Kotono was the top student of her year and the only one 'better' than Gunzou (who had fallen hard for her). Aside from that, little is known about what was happening around her back then.

Kotono was among those students who were at Facility #4 during the Fire. Officially, she died, though her body had never been found. Gunzou had seen her been consumed by fire - something that gives him nightmares to this day - and it became the straw that broke the proverbial camel's back. Unable to live in the world that didn't allow her to exist, Gunzou ran away from Yokosuka as soon as he got his chance to.

After her 'death', Supreme Battleship Yamato took her physical appearance as her first Mental Model and a second Mental Model acting like Kotono Amaha has made herself known in the story. Manga Chapter 116 reveals that she was selected by Yamato to be the Fog's superordinate program in the event that the Admiralty Code vanished for 100 years without reappearing. Whether or not she is still human remains to be seen.

Kotono is the original Yamato Edit

Both Mental Models of Superbattleship Yamato are identical to Kotono in their appearances. The reason for it being that while she was present in the Japanese National Maritime Institute of Technology her personality was fully formed and her appearance imprinted which led to her possibly breaking down upon acknowledging her status as the ship and forming a separate personality that was simply name Yamato as her coping mechanism with her trauma.

Facility #4 Fire, while being an accident, served as a trigger for Kotono to acknowledge her nature as a Mental Model and forced her to run away due to mental trauma and stress. Being afraid of rejection by the humans would be a natural response for someone in her position.

Another possibility is that Superbattleship Yamato had two Mental Models from the very beginning. And one of them - Kotono - was sent to live among the humans in order to gain experiences. Kotono's knowledge of being a Mental Model was suppressed to reduce the chances of her slipping up and revealing her true nature to humans.

Because of this, her personality grew radically different from her that of her 'twin'. Furthermore, because Kotono spent years being a separate individual, even after she reunited with Yamato, the two of them never act as single-minded twins.

As for Facility #4 Fire... It might have been an accident that broke the mental blocks and revealed Kotono's true nature to herself - thus forcing her to return to Yamato. Or it could have been a deliberate distraction staged by Yamato to let Kotono disappear from human society. 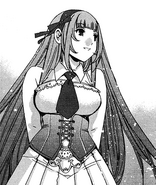 Kotono Amaha, consumed by the fire during the Facility #4 tragedy. 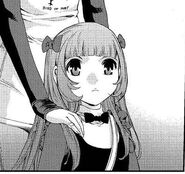 Kontono Amaha as a child in 2045
Add a photo to this gallery
Retrieved from "https://aokihagane.fandom.com/wiki/Kotono_Amaha?oldid=8486"
Community content is available under CC-BY-SA unless otherwise noted.