Aoki Hagane no Arpeggio Wiki
Register
Don't have an account?
Sign In
Advertisement
in: Characters, Mental Models, Fleet of Fog vessels,
and 2 more

Kongou is one of the "Fog" battleships and the flagship of the First Oriental Fleet.

Kongou is the "Fog" reincarnation of the Kongou-class WWII battleship Kongou. She has purplish markings on her hull. All three of her sisters - Kirishima, Haruna and Hiei - have made their appearance in the manga.

As a battleship, Kongou has a huge arsenal at her disposal: a number of Photon cannons, 30 torpedo tubes, over one hundred missile launchers and a Super-Graviton Cannon with four gravity-focusing units. In the manga, she can also use Flagship equipment; hers allows to summon union cores of subservient vessels and prints new hulls for them with locally-available nano-materials.

Kongou is the second known flagship of the First Oriental Fleet. She replaced Hyuuga on this position after Hyuuga was sunk by I-401 and deserted from the "Fleet of Fog".

Battleship Kongou has one Mental Model that appears to be a girl in her late teens. She has very long pale-blonde hair made into two spiky buns with two long locks framing her face. She has pale skin, further accentuated by the pale blue lipstick she wears, and crimson eyes. Her clothes consist of a dark purple ballgown with long train and dark pantyhose.

Kongou appears to have an apathetic personality. She has no known hobbies and has shown a minimal amount of emotions. However, it is known that she doesn't like diving underwater (as she can use only torpedoes and Super-Graviton Cannon there) and can somehow communicate with the seagulls that are always seen around her.

While Kongou is unwilling to get her own hands dirty, when she does do something, she goes all out. This is shown in the anime with her single minded obsession with killing Chihaya, as well as an attachment to her subordinate, the heavy cruiser Maya, to the point where the Fog decide she is rogue and attempt to lock her down. Even when it's revealed Maya's mental model is an observation program spying on her, her attachment doesn't seem to wither, choosing to fuse with Maya instead of losing her(and for the huge boost in power). It is interesting to note that the reformed Kongou keeps Maya's piano on her deck as further proof of the bond they shared.

Eventually, Iona manages to come into contact with Kongou and, in so doing, modify her behavior, causing her to defect from the Fog and side with Iona, if not humanity as a whole, though she still refuses to join Chihaya's fleet, instead roaming the oceans by herself, but promising to "invite Iona over for tea sometime".

While Kongou is one of the first "Fog" vessels to make her appearance in series, until recent chapters Kongou only played a role of an observer. There, Kongou decides that she herself should deal with the problem that is I-401. Originally, Kongou intended to leave Hiei as an acting flagship of her fleet, but Hiei decided that she should be Kongou's escort and the role of acting flagship fell onto Ise.

During the initial stages of the battle against I-401 Kongou remained in the rear of her fleet, where she worked on deploying her Flagship equipment with some assistance from repair vessels led Akashi. That however left her quite vulnerable to enemy attacks and had not Ashigara taken that hit for her, Kongou might have actually been sunk... Once her Flagship equipment was deployed, Kongou began summoning a number of submarines (I-19, I-22, possibly others) to assist her fleet in hunting the now-wounded I-401 down.

However, the Kongou is new free from the Flagship Equipment, removed from the scene by Akashi, and has now changed her target to the Matsushima II, which has Chihaya Gunzou inboard. She kept underway to avoid being sniped by the option ships.

That, however, worked only until Gunzou and Iona took away her (and her fleet's) natural buoyancy by exploiting an underwater deposit of methane hydrates: unable to move, Kongou wasn't able to stop I-401 from hitting her with warplane-carried Corrosive Warhead Torpedoes. It is not clear, whether that attack was fatal or merely crippling, but Kongou still took heavy damage. Not to go down alone, though, she snipes Matsushima II with her normal cannons.

When that doesn't work, she takes control over her broken off prow and fires Corrosive Warhead Torpedoes at sinking Matsushima II. When that fails to do Chihaya Gunzou, partially because of Yukikaze's intervention, she rams whatever is left of her hull into Matsushima II.

But beside the idea of Kongou killing Chihaya Gunzou she saved him and brought him to Choukai and explained to her that she saved Gunzou because she heard a voice telling her that some future is there and Gunzou is the key.

In anime Kongou still holds her position of the First Oriental Fleet flagship. And up until the battle between I-401 and Kirishima and Haruna in Yokosuka, she was acting almost identically to her manga counterpart. However, when it became clear that her two sister battleships had defected from the "Fleet of Fog", Kongou becomes obsessed with removing the abnormalities - namely, she wanted to sink I-401 and kill Chihaya Gunzou.

Her first attempt was when I-401 was leaving Iwo Jima, however, Hyuuga managed to hack Kongou and prevented her from destroying I-401 with a shot from Super-Graviton Cannon. I-401 then disappeared via Burst mode (only to be intercepted by I-400 and I-402 later).

Kongou's rather emotion-driven attack had resulted in her being stripped of her flagship status locked down by I-400 and I-402, however she managed to break the lock down and, after absorbing Maya and a few light cruisers, she made her second attempt to sink I-401.

However, when she - now operating a construct looking more like the Death Star from Star Wars than anything else - caught up with I-401, said submarine being about to engage in combat with American "Fleet of Fog". In order to remove the possibility of any of those ships defecting to I-401's side, Kongou obliterated them all with her overpowered Super-Graviton Cannon, before turning it against I-401 herself.

Since Kongou had cut herself from the Joint Tactical Network, in order to contact her, someone needed to establish a direct link with her core. In other words, someone needed to come all the way up to Kongou's 'deck' and touch her Mental Model. Iona volunteered to do that.

Iona had been successfully delivered to Kongou's 'deck' and actually managed to tag her core. However, Kongou had built a powerful defenses around her 'heart', so Iona needed a lot of time to break through. And while she was fighting against those defenses, Iona also had to fight against Kongou's Mental Model in the real world. This fight was one-sided and Kongou totally dominated it. In the end, she managed to pin Iona against the Super-Graviton Cannon and prepared to fire.

That was when Iona finally managed to break through the defenses around Kongou's core in the virtual world. Once able to come in contact with Kongou's self, Iona, wishing to help her, proceeded to comfort the crying battleship. And accepting this, Kongou ceased her attacks in the real world.

Following her 'defeat', Kongou accepted Iona's friendship, but chose to return to her patrols around Japan instead of accompanying I-401 to San Diego.

It is interesting to note that the reformed Kongou keeps Maya's piano on her deck.

In the Cadenza film, a completely remodeled Kongou turns up at the last moment to save the damaged I-401 from being sniped by Hiei's Super-Graviton cannon. She deflects Hiei's shot with her own cannon and then charges at flank speed, opening her own cannon and bringing her own upper hull down onto Hiei's deck. The two sisters then engage in a massive firefight which enables the I-401 to get through Hiei's defenses and fight Musashi.

In the film, she is now wearing a different dress and her hair is in a different style, although she is still wearing the pale blue lipstick.

A rendition of Kongou is featured in the massive online multiplayer game World of Warships, complete with a commander portrait of her Mental Model and a unique voice. Unfortunately, the ship is just a standard Kongo with a painted hull and the commander's voice is in Japanese. 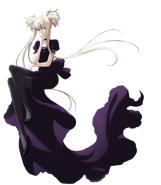 Kongo as seen in World of Warships

"I decide where I go and when I return"

Community content is available under CC-BY-SA unless otherwise noted.
Advertisement