Kirishima is one of the "Fog" battleships of the Second Oriental Fleet. She is partnered with her 'sister' Haruna. Together they attacked Yokosuka in an attempt to sink I-401, but were sunk themselves.

Kirishima is a "Fog" reincarnation of the Kongou-class WWII battleship Kirishima. She has greenish markings on her hull. All three of her sisters - Haruna, Kongou and Hiei - have made their appearance in manga.

As a battleship, Kirishima has a huge arsenal at her disposal: a number of Photon cannons, 8 torpedo tubes (though she seems to be not using them), over one hundred missile launchers. Kirishima has also shown the ability to produce powerful shockwaves when she places one of her antennae towers into the water; a single energy discharge was enough to blow up all sonic emitters within the Yokosuka Bay and to severely damage Hakugei (3) submarine.

While Kirishima possesses her own independent Super-Graviton Cannon (which appears to have four charge-up pods when compared to just two for Takao-class heavy cruisers), she instead relies on a more powerful version that requires her to merge with Haruna. When merged, Kirishima is in front of Haruna and does the aiming, while her sister concentrates on suppressing and guiding the cannon's energy. While this attack mode is very powerful, the cannon requires a rather long time to charge up. Additionally, if the energy is destabilized (e.g. hit with a corrosive torpedo), both ships will suffer heavy damage and might be destroyed.

Battleship Kirishima has one Mental Model that appears to be a girl in her late teens or a young woman in her early twenties. She has light-brown hair and blue eyes. Her clothes are very different in the manga and in the anime. In manga she wears rather demure brownish coat with dark shirt underneath and similar brownish pants. In anime she is a lot more punkish with her colorful sleeveless shirt and pants (which also have trouser-legs of different lengths).

After having been defeated, her second Mental Model becomes one of Osakabe Makie's teddy bears, named "Yotarou." This is a pink disproportionate teddy bear with beige accents and coloring on certain parts of its body, among them being the inside of its ears, its snout, and its felt-tip claws. Its abdomen and forehead have hearts drawn in a similar colour, and its limbs end in stubs. On the left arm of the teddy bear is a chartreuse wristband laden with evergreen stripes

Kirishima first appears to be arrogant and impatient; she gets annoyed when Haruna keeps collecting and categorizing humans' words instead of concentrating on devastating the port. She also doesn't hold back and attacks with the maximal amount of firepower she is allowed to use.

After her defeat in Yokosuka, Kirishima quelled her arrogancy a bit, but she is still rather impatient and cynical. Kirishima also has a mean streak and she enjoyed teasing Haruna by calling her "Haruharu" as Makie did. Haruna retaliated when she heard Makie calling the teddy bear containing Kirishima's Union Core "Youtarou".

In the anime, Kirishima appears to be quite fond of eating.

Kirishima and Haruna attacked Yokosuka port a little bit after I-401 arrived there. Originally, the said submarine was their primary target, but after Hakugei (3) attacked them instead, they added it on their to-sink list as well. Neither Kirishima nor Haruna really expected anything in humans' possession to be of any danger, and thus they were more toying with the human forces then anything else.

Even when I-401 re-joined the fight, neither Kirishima nor Haruna thought of her as a big danger to them, despite the fact that I-401 has already sunk a battleship (Hyuuga). Still thinking that this battle is more of a game than anything else, Kirishima admits that she's having a lot of fun with trying to sink I-401 and that she wants to do it herself. However, because of how well I-401 was at evading their attacks, Kirishima had to join up with Haruna in order to use their more powerful weapon while having I-401 trapped in an anti-gravity field. Unfortunately for them, Gunzou quickly turned the table against them and had sunk them both with the help from Hakugei (3).

As the result, Haruna lost her hull while Kirishima was stripped down to her core. Later, they both were found in one of the warehouses by Makie, and were invited to her mansion. Here, Haruna had created a new temporary body for Kirishima: a teddy bear in order for Kirishima's appearance not to raise too many questions within the girl.

Upon seeing professor Osakabe's death, Haruna went berserk, and Kirishima was doing her best to stop her sister from unleashing an annihilation attack upon the nearby cities through the weapon systems aboard heavy cruiser Maya. She was not successful, but in the end Haruna stopped by the intervention of the Admiralty Code holder.

After this, Kirishima followed Haruna as the two of them, along with Maya, followed Makie to the Nothern region capital. There, it is revealed that underneath the head of the teddy bear Kirishima has her normal, human-like head.

While they were in the Northern region, Haruna tried to meet up with Makie again, but was denied all the time. In the end, having grown impatient, Haruna infiltrates the mansion. During her talk with Makie, Haruna reassured the the girl that she is no longer a part of the "Fog" and has no intentions of selling her away to them.

With her direct superior, Kongou, was personally leading the bulk of the fleet on a hunter-killer mission against I-401, Haruna took that as an opportunity to delay her original mission of bringing Makie back; at the suggestion by Makoto Osakabe, the Northern region's administrator, Haruna decided to use this "spare time" to investigate the mysterious fire that destroyed the Fourth Facility in Yokosuka years ago, thus hoping to gain insight into Gunzou, the human who defeated Haruna and Kirishima. 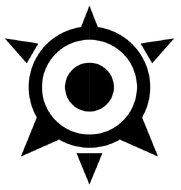 Kirishima's sigil
Add a photo to this gallery
Retrieved from "https://aokihagane.fandom.com/wiki/Kirishima?oldid=8304"
Community content is available under CC-BY-SA unless otherwise noted.