Shizuka Hodzumi is the member of the I-401's crew and the current sonar operator. Unlike the rest of the crew, she never attended the Japanese National Maritime Institute of Technology. The reasons as to why she joined are currently unknown.

Shizuka has long straight black hair and grayish eyes, that are hidden behind glasses. Her clothes vary, but most often they are picked in a way to make her appear as a meek girl and a wall-flower.

Shizuka is normally quiet and a bit secretive. She seems to be a bit isolated from the rest of the crew, but given that she comes from a completely different place, it is not something completely unexpected. Shizuka is very intelligent and can quickly adapt to using even to the pieces of technology just created by Hyuuga. She might be quite stubborn at times, however she is willing to yield if the arguments against her position are strong enough-this was demonstrated when Sou asked to take a break while everyone on-board I-401 is keeping an eye on the preparations taken by the Kongou's fleet that is about to start hunting them down.

Shizuka, apparently, likes growing potted plants and has several of them next to her workplace. She is also the main cook of the crew.

However, there is more to her than this. Her wall-flower image is actually a deception: Shizuka has at least some training in special-ops tactics and using various equipment that would not be out of place in spy movies. She owns several firearms and grenades and she knows how to use them. While she can't match a professional SEAL, she can delay them quite well if she has territorial advantage. When she is in such combat mode, her personality seems to shift into a more playful one.

We are first introduced to Shizuka when she is already the member of the I-401's crew for eight months - she had joined not long after the battle between I-401 and Hyuuga, after Maruri had left. Until the attack by Japanese army on the Iwo Jima base, she appeared to be a background character.

During the attack on Iwo Jima, Shizuka was the only member of the I-401's crew, who didn't have a 'clone' created and controlled by Takao. Instead, after destroying all of the important data on the computers of the base, Shizuka equips her special equipment and goes to fight against the invading soldiers with just some support from Hyuuga.

Apparently, Shizuka is a Taiwanese Soldier; more than that, by the looks of it, her parent also were either assassins or a part of special forces. Shizuka has Japanese army communication codes and with Hyuuga's help she jams their communication. Isolating groups of soldiers from one another and utilizing her territorial advantage, Shizuka managed to take out at least a dozen of invaders, before she gets cornered. However, before she could be disposed of, Hyuuga charges in and saves her. After that, while Hyuuga's robots were distracting the army, the Mental Model carried Shizuka to I-401.

Following this episode, Shizuka shifts back to being a background character. 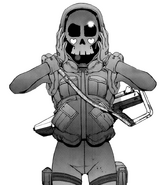 Shizuka Hodzumi's anime render
Add a photo to this gallery
Retrieved from "https://aokihagane.fandom.com/wiki/Hodzumi_Shizuka?oldid=8478"
Community content is available under CC-BY-SA unless otherwise noted.