Haruna is one of the "Fog" battleships of the Second Oriental Fleet. She is partnered with her sister battleship Kirishima. Together they attacked Yokosuka in an attempt to destroy I-401, but were sunk themselves.

Haruna is a "Fog" reincarnation of the WWII Kongo-class battleship Haruna. She has yellowish markings on her hull. All three of her sisters - Kirishima, Kongou and Hiei - have made their appearance in the manga.

As a battleship, Haruna has a huge arsenal at her disposal: a number of Photon cannons, 8 torpedo tubes (though she seems not to use them) and over one hundred missile launchers. Unlike Kirishima, Haruna seems to be unable to create an underwater energy shockwave discharge.

While Haruna should possess her own independent Super-Graviton Cannon (presumed to be similar to that of Kirishima), she instead relies on a more powerful version that requires her to merge with Kirishima. When merged, Haruna places herself behind Kirishima and concentrates on suppressing and guiding the cannon's energy while her sister does the aiming. While this attack mode is very powerful, the cannon requires a rather long time to charge up. Additionally, if the energy is destabilized (e.g. hit with a corrosive torpedo), both ships will suffer heavy damage and might be destroyed.

Battleship Haruna has one Mental Model that appears to be a girl in her late teens. She has long blonde hair in two pigtails and greenish eyes. Her clothes consist of a very long dark overcoat with a yellow dress (or just black lingerie, and at one point, a yellow one-piece swimsuit) underneath it. In concept art first showing her with her coat open, she wore baggy shorts and a tube top.

Haruna first appears to be emotionless and stoic. She is much calmer than Kirishima and she finds time to analyse and categorize human speech patterns while she and Kirishima are destroying the port. She isn't very proactive, preferring to let her more aggressive sister take the lead in battle and tends to go along with Kirishima's plans.

After her defeat in Yokosuka, Haruna broadened her range of emotional expression, became far more proactive and immersed into trying to become a good friend of Makie Osakabe. Haruna is persistent, too; after Makie was brought to the Northern region, Haruna attempted to visit her every day, even if she was always denied; at one point, Haruna lost her patience and infiltrated the Chihaya mansion solely to speak with Makie. Haruna becomes one of the most human-like Mental Models in the series, and has displayed the widest range of emotion, from uncontrollable rage to profound sadness and despair.

Haruna appears to have interests in psychology of friendship and linguistics. Her hobby is collecting words, commenting it is "such a (communication) beautiful system;" it is easily indicative when she does, each time concluding with her saying, "Entry logged. Categorized. Saved."

Kirishima and Haruna attacked Yokosuka port a little bit after I-401 arrived there. Originally, the said submarine was their primary target, but after Hakugei (3) attacked them instead, they added it on their to-sink list as well. Neither Kirishima nor Haruna really expected anything in humans' possession to be of any danger, and thus they were merely toying with the human forces.

Even when I-401 re-joined the fight, neither Kirishima nor Haruna thought of her as a big danger to them, despite the fact that I-401 has already sunk a battleship (Hyuuga). Because of how well I-401 was at evading their attacks, Haruna had to join up with Kirishima in order to use their more powerful weapon while having I-401 trapped in an anti-gravity field. Unfortunately for them, Gunzou quickly turned the table against them and sunk them both with help from Hakugei (3).

As the result, Haruna lost her ship body while Kirishima was stripped down to her core, which Kirishima had entrusted Haruna. Later, they both were found in one of the warehouses by Makie, and were invited to her mansion. Here, Haruna had created a new temporary body for Kirishima: a teddy bear, in order for Kirishima's appearance not to raise too many questions within the girl.

When the mansion was attacked by the Japanese army, Haruna went ahead to deal with the trespassers, while Kirishima was protecting the girl. In this fight Haruna had shown that even on her own a Mental Model is a formidable opponent, capable of dispatching an infanty-supported tank company. Upon rejoining her sister in the mansion's yard, Haruna switched her roles with Kirishima; now, Haruna protected Makie (using her own coat as a shield), while Kirishima went ahead to dispatch sniper teams.

Upon seeing professor Osakabe's death, Haruna went berserk, while still connected to the weapon systems aboard heavy cruiser Maya. Kirishima's attempts to stop her were futile, but in the end, Haruna was stopped by the intervention of the holder of the Admiralty Code.

After this, Haruna and Kirishima (on board the heavy cruiser Maya) followed Makie to the Nothern region capital. There Haruna tried to meet up with Makie again, but was always denied. In the end, having grown impatient, Haruna infiltrates the mansion. During her talk with Makie, Haruna reassures the the girl that she is no longer part of the "Fog" and has no intentions of selling her away to them.

While her direct superior, Kongou, was personally leading the bulk of the First Oriental fleet on a hunter-killer mission against I-401, Haruna took that as an opportunity to delay her original mission of bringing Makie back; at the suggestion by Makoto Osakabe, the Northern region's administrator, Haruna decided to use this "spare time" to investigate the mysterious fire that destroyed the Facility #4 in Yokosuka years ago, thus hoping to gain insight into Gunzou, the captain of the I-401, who defeated Haruna and Kirishima.

Haruna and co. arrive at Yokosuka shortly after Kongou is sunk, and Haruna enrolls herself into the Japanese National Maritime Institute of Technology. Unlike with Takao, however, several people are explicitly told about her being a Mental Model of a "Fleet of Fog" battleship, although this is treated indifferently for the most part.

Haruna's sister battleship and partner. Their relationship can be described as a strong friendship and dependence on one another, although it is arguably more like a sisterly bond. Though Haruna appears to be on occasion annoyed by her sister's teasing or behavior, she finds it enjoyable to tease Kirishima with knowing she has yet to regain her actual Mental Model.

Her other sister and superior, with whom she and Kirishima share a mostly business-like relationship. Owed to partly from Kongou's often cold and calculative nature—a mutual trait between Haruna and Kongou, although the latter is more so to an extent—Haruna is much more formal with her than her partner is whenever they are summoned to discuss any particular matters. Kongou comes to respect Haruna's defection from the "Fleet of Fog."

Haruna is the one who manages her. Most commonly, she keeps Maya's core suspended as Maya's over-enthusiastic behavior annoys Haruna very much.

Initially seen as an enemy, and the ship responsible for having sunk her and Kirishima; this relationship is subverted upon Iona's responding to her distress call, when she and Makie were being hunted. Haruna acknowledges Iona as a valued ally, although this is not followed up on.

Haruna's first friend, who is very much valued by her. Haruna even betrays the "Fleet of Fog" in order to fulfill professor Osakabe's request of being the girl's friend.

This man accepted Haruna as Makie's friend, even if he knew that she was a Mental Model. Likewise, Haruna was aware of him watching her, as well as having acknowledged Prof. Osakabe being Makie's "father." As the second human life she had cherished, despite having only been with him for a brief amount of time, witnessing his death made Haruna go berserk. 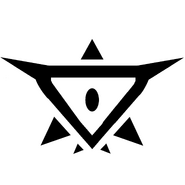 haruna sigil
Add a photo to this gallery
Retrieved from "https://aokihagane.fandom.com/wiki/Haruna?oldid=8303"
Community content is available under CC-BY-SA unless otherwise noted.