Shouzou Chihaya is the current captain of superbattleship Musashi and one of the antagonists of the series. He is the father to the series' protagonist Gunzou Chihaya and also the first captain of I-401 submarine.

Shouzou Chihaya is a rather tall and well-muscled man with an overwhelming presence. His exact age is unknown, but since he had been participating in the "Great Battle" (2039) as the JMSDF commander, he must be around 50 right now (2056).

He has short black (with some grays in anime adaptation) hair, weepers and a short beard. Nowadays his eyes are constantly hidden behind sunglasses, but from the earlier days we know that he has dark, likely brown or black, eyes. It the current time he has a prominent scar next to his left eye and several smaller scars on his face; these scars weren't there until after 2045-46.

In the past he was almost always seen in the white navy uniform, which consists of white jacket with shoulder pads, white pants and white captain's hat with black visor. After defecting to the "Fleet of Fog" he is seen wearing white or light-gray coat with white pants underneath. He is once seen in casual clothes, which consist of black muscle-tight T-shirt and blue jeans.

Shouzou Chihaya is intelligent and full of tricks. He was the only man we know who managed to successfully capture a "Fleet of Fog" vessel during the "Great Battle". And despite being a hardcore Navy commander, he apparently was pretty good with kids. He spent a lot of time with his (only) son Gunzou, and had taught him quite a few things about Navy and battleships.

Shouzou we see in the present is a bit different. He's still very intelligent, but he became more of a wheeler dealer, who uses politics and other humans as tools to reach his own goals. He also seems to have lost a lot of his emotions: even Musashi chastises him for his underwhelming reaction to the news that his son might have perished during the attack on Iwo Jima.

While Shouzou appears to be someone who will not tolerate failures, he still allows his (human) subordinates some freedom - if only to let them learn the intricacies of the naval war.

Shouzou Chihaya is married to a professional ornithologist Saori Chihaya (maiden surname is unknown) and they have a son Gunzou, who is the current captain of I-401 submarine. While they all are still alive, the family is pretty much no more.

Saori Chihaya is Shouzou's wife. She's an ornithologist who owns a large collection of living birds at Chihaya mansion in the Northern region. Because of Shouzou's devotion to his work and Gunzou's interest in sea and ships, Saori came to a conclusion that "boys are boring"

Following the discovery of her husband's betrayal, Saori was placed under the house arrest at the Chihaya mansion. Officially for her safety, while the real reason for this house arrest is unknown.

While under the house arrest, Saori acquired two 'daughters' she so wished for. One of them is heavy cruiser Takao, to whom she gave her blessing to become Gunzou's girlfriend, the other - Makie Osakabe, who was placed with her following the attack on Osakabe mansion.

Gunzou Chihaya is Shouzou's only known child. Gunzou early in his life had decided that he wanted to follow his father's steps and made it his goal to became a captain. And when Shouzou was discovered aboard the "Fleet of Fog" superbattleship Musashi, following the years of being considered MIA, Gunzou made it his new goal to find him and ask 'why?'.

While Gunzou still has his mother just a telephone call away, he had never contacted her even once after he ran from Yokosuka with I-401, even after he was cleared of all charges against him.

Gunzou hasn't given up on his desire to meet his father again - if anything it became even stronger, following the formation of the alliance between United Kingdom and "Scarlet Fleet". Right now he is a bit too busy with his jobs to actively hunt Shouzou down. Though Captain Zordan Stark, who works for Shouzou, might be a good link for him for now.

It is not clear how Shouzou Chihaya had spent his youth, but by the year 2038 he had reached the position of JMSDF commander. He had participated in the "Great battle" in 2039 and, even though the battle was lost, he became the hero of Japanese people and, maybe, of entire human race because he managed to capture a "Fleet of Fog" submarine I-401 and deliver her to Yokosuka port, where the scientists attempted to study her.

Any and all attempts to even understand the technology involved in the creation of I-401, however, failed and after six years and the Japanese government finally gave up and decided that she could be used to combat "Fleet of Fog" as she was. Shouzou Chihaya was promoted and became her captain. Sometime in 2045 I-401 was sent into her maiden (manned) voyage, despite the opposition's protests.

It is not clear, what had happened in the sea, but soon all contact with I-401 was lost. Eventually, both the submarine and her entire crew were labeled as Missing In Action.

While this is only a speculation, it is supposed that around the time I-401 went incommunicado, Shouzou Chihaya had run into some other "Fleet of Fog" vessels, possibly even into Musashi herself. He might have already had made his plans to join the "Fleet of Fog" at that point, or it was an on-spot decision, but in the end he and his crew abandoned I-401 and boarded the other "Fog" ship.

Without her crew, I-401 eventually returned to Yokosuka port in 2046. There she was re-captured and placed into the dry docks and locked up. In 2054 she broke free and joined Shouzou's son, Gunzou.

Discovery of the Traitor (2054)Edit

For the longest time the fate of the I-401's crew and her captain Shouzou Chihaya remained unknown. However, in 2054 a spy drone had discovered them inboard of the "Fleet of Fog" superbattleship Musashi in Normandy. Shouzou was immediately labeled as the traitor of humanity, and some people like Ryoukan Kita began talking about him wanting to become the King of "Fog".

Following this discovery, Shouzou's wife, Saori, was placed under the house arrest in the Chihaya mansion in the Northern region. And while Gunzou was allowed to continue his education in the Japanese National Maritime Institute of Technology, he was undoubtedly placed under a lot of pressure as the son of the traitor. Eventually this, and his personal loss at the Faculty #4 fire caused Gunzou to run away from Yokosuka with I-401.

Whatever he had been doing, Shouzou Chihaya wasn't wasting time. By the time of his first appearance in the series, he is already a commander of superbattleship Musashi and has a number of smaller vessel to form his personal escadra named the "Scarlet Fleet". Out of those vessels, most notable are U-2501 submarine along with her fleet of Seehund drone submarines and the resupply vessel Milchkuh.

While his true loyalties are unknown, Shouzou Chihaya lends U-2501 and her supporting vessels to the Second Oriental Fleet led by flagship Nagato in order to hunt down and exterminate Oriental Fleets' traitors like I-401 and heavy cruiser Takao. And he does that even knowing that I-401 is commanded by his son.

Aside from that, the "Scarlet Fleet", like many other within the "Fleet of Fog", is looking for the missing Admiralty Code. Since it was last seen in Europe by capital ship Bismarck, it might explain why the "Scarlet Fleet" is also seen in Atlantic ocean and so far away from Japan.

Most recently, Shouzou Chihaya, as the leader of the "Scarlet Fleet", and United Kingdom had formed an alliance. Shouzou had promised to used the power of the "Fleet of Fog" in order to help Great Britain in the Great European war and bring peace to Europe.

In that proclamation he also separated himself from the rest of the "Fleet of Fog" as he said his fleet will destroy them if they happen to be on the opposing side. Additionally, while Shouzou used pretty words about helping United Kingdom in his speech, after that Musashi tells him that he 'acts cool even in farce', which means that Shouzou might be forming this alliance for some personal gain-most likely in order to have unlimited access to Europe as he and his people are searching for the Admiralty Code.

In the most recent (48th) chapter in Yamato's memories we see wounded Shouzou lying on Musashi's deck. There, Shouzou is wearing his old uniform, which he wore while he still was the captain of I-401. Additionally, in the background we see a Sen-toku class submarine gaining a Mental Model. While there is no proof to this right now, it might be that the submarine in question is I-401. If that is true, then: 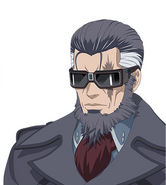 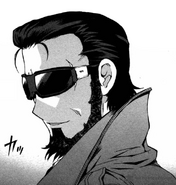 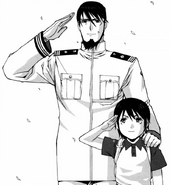 Shouzou Chihaya with his son Gunzou

Shouzou becoming the captain of I-401

Shouzou and Musashi
Add a photo to this gallery
Retrieved from "https://aokihagane.fandom.com/wiki/Chihaya_Shouzou?oldid=7956"
Community content is available under CC-BY-SA unless otherwise noted.